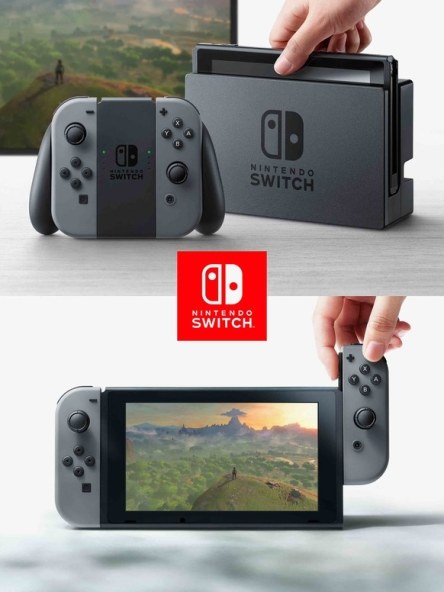 It’s finally been announced!  I am very intrigued by what I saw in Nintendo’s announcement about its upcoming product, the Nintendo Switch.  I actually like the name.  It’s so much better than Wii and Wii U.  I do like the detachable controllers from the sides, but they will require batteries (which I assume will be rechargeable with the tablet?).  They also look a bit small on their own, but it would make multiplayer on the go a lot more fun.

I like the tablet itself, although they didn’t show any touch-screen controls in the video, so I’m doubting whether it has it or not.  This is a big departure from what made their current handheld (DS and 3DS) so great.  The touch screen allowed developers to be very creative.  I’m concerned about the fate of the 3DS.  I hope that it will continue to be a handheld in its own right.

Similar to the DS, the Switch appears to use cartridges, of which I’m a fan.  Cartridges last a lot longer than CDs/DVDs.  I also feel that they are a lot more fun to collect.  I’m glad that Nintendo is finally going to have the power (Nvidia Tegra GPU) to look good on a large HDTV.  I still don’t think that it’s designed to quite compete with XBone and PS4, but I will certainly be picking one up in March.

You can find the announcement video here:  http://www.nintendo.com/switch.