I’ve been obsessed with video games since around sixth grade, when I first played a little game called Tetris.  I had played games before that, but that’s really when it began.  I don’t believe that they are a waste of time and I may get into deeper subjects such as the societal biases against video games and such, but for the most part, you’re going to see discussions about games, games, games and the occasional console.

I’m a thirty-something woman living in Dickinson, TX.  I run a tech support department when I’m not playing video games.  I am married to an awesome guy, Matt.  He’s a gamer, too, and will be a guest author here.

In the image in the circle up in the top left, I’ll show which game I’m currently playing.  I have a very large collection of games spanning multiple consoles, so game on!  I’ve got links to some of my favorite tools and sites and will eventually list my collections.

Edit:  You know, I said it started with Tetris and sixth grade, but I think I can thank my parents for starting my life-long obsession.  Here’s my dad and I playing the Intellivision that we had: 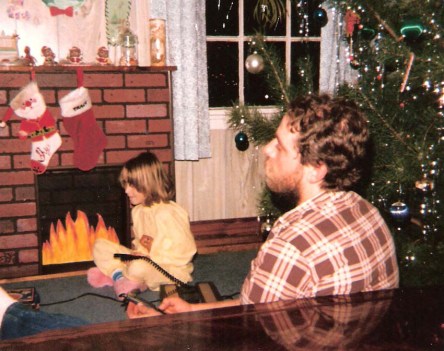 Here’s a bit more of an explanation of how this blog came to be:

Welcome to my obsession!