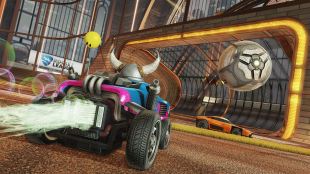 Rocket League was one of those games that I started playing and immediately said “YES MORE PLEASE!”.  I was pretty good from the start and it made me feel awesome.  It’s one of the newer games to make my list, but according to Steam, I’ve played this game for 101 hours.  I’ve probably put in another 20 or so on the XBone.

This game has you driving an RC car and playing soccer.  They’ve got a basketball mode, too, but I haven’t played it.  It’s a simple concept, but it’s hard enough that you feel truly accomplished when you score a goal or make an epic save.  You can play single-player against bots, but the real fun is playing against real people online.  I am really not a fan of multiplayer games, but this is the exception.  The competition online can be fierce and again, it adds to that awesome feeling.

As you play, you unlock new cars and other ways to customize your vehicle.  My preferred vehicle is the Merchant, which is a van.  The idea of a van driving around an arena is funny to me.  You can also add little hats and antennas to your car.  You can play 1v1, 2v2, 3v3 or 4v4.  I’ve tried all of these, but I’ve found 3v3 to be my favorite.

The graphics are great, but if you play online, sometimes lag will creep in and “rubber band” you around the arena.  This can make it tough to play.  A strong internet connection is suggested.  The sound really adds to the experience with fog horns and fans and different sounds for the different boosts.  I strongly recommend you check this one out!  If you have a PS4, I believe it is free for you.