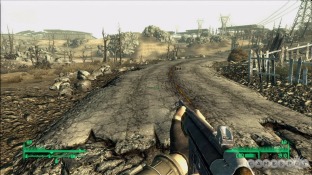 I had no idea what Fallout 3 was about when I picked it up.  The back cover looked interesting, so I decided to give it a shot.  I played it that night starting around 7PM and was still playing when Matt got up the next morning at 7AM.  I had no idea what time it was and didn’t really care.  This game will suck you in and keep you engaged until someone makes you stop or you pass out, hopefully not at the same time.

The game has a neat tutorial and character creation process.  You start as a child who was just born.  You are allowed to pick what you are going to look like when you grow up, but the character creation process doesn’t matter much as you will rarely ever see your character throughout the game.  As you grow through your childhood, you select more attributes that shape your character.  It’s pretty creative and a bit more fun than other tutorials.

Once you complete that, the story starts and you find yourself outside of your home, which as been a nuclear-safe underground vault.  You leave this comfy home and are out in the wasteland and sure enough, it has been ravaged by nuclear war.  You’ve got radiation to worry about as well as a myriad of mutated creatures.  Humanity is few and far between, but the people that you will meet need help.  They will send you out on missions and you will find the rewards helpful.  They also seem to be stuck in the 1950s.

Once again, this game makes my list mostly due to the engaging story.  You are trying to find your surviving family, but you get wound up in a fairly deep controversy.  This game gives you a lot of choices and they matter later in the game.  If you help one guy destroy a city, you’re going to make some enemies.

I am typically not a fan of first-person shooters (FPS), but this game has a combat system that takes out a lot of the “twitch” aspect.  It’s called VATS and allows you to target specific parts of your enemy.  It’s very clever and made me look forward to battle instead of dreading it.  I would call the game more of an RPG than FPS, however, as you level up and pick attributes to strengthen your character.  There are so many options to choose from that you will likely never create the same character twice. 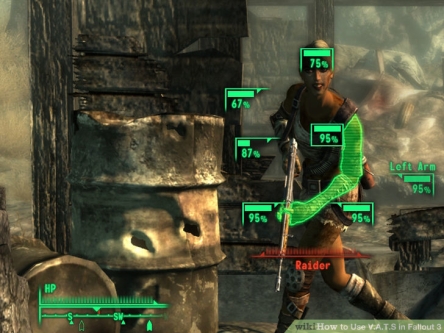 There is a lot to this game including a basic crafting system.  There are things to collect (yay!) and it is just a lot of fun.  It’s also an open-world game, meaning that you can go and do what you want when you want.  The game doesn’t force you down a certain path, although I do recommend playing through the main story.  I’m including Fallout 3 New Vegas as well as all expansions in this Top 25 as they are all fun and add to this game.  New Vegas is its own stand-alone game, but it runs off of this same engine.  Look for a post on Fallout 4 later on.

The graphics in this game are great, the soundtrack is awesome and the sound effects add to the game.  You will be singing music from the 50’s for a long time after playing this one.  The controls are great and everything about this game feels innovative.  This is by the same company that makes the Elder Scrolls series and I’ve been told it just feels like an apocalyptic version of that, but I think it feels different enough.  I strongly recommend that you play this one.