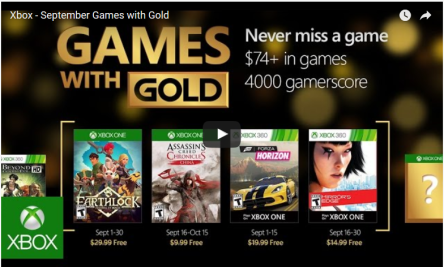 August is almost over, so it’s time to look at September’s free Games with Gold from Microsoft.  The games are:

I plan on downloading all of these.  Earthlock is a new game coming out on September 1.  It is a turn-based RPG of some sort.  I see Harvest Moon being tossed around with it, so it’s likely a similar style game.

I have played and enjoyed Assassin’s Creed 1, and I expect to enjoy China as well.  I’m not sure what is different about the Chronicles series versus the regular, though, but I’ll find out!

I haven’t played a Forza game yet and I’m looking forward to playing the first Horizon game.

I don’t know anything about Mirror’s Edge.  I do know that this is the sequel in the series, but that’s it.  It’s free, so I’ll try it out.