I have tried and tried to like anime.  It’s not something that has come easily to me.  I like English-language shows such as Samurai Jack or Voltron, but I have never been able to get into a Japanese-language anime.  Then I saw Sword Art Online and was smitten.

It’s only natural that I would enjoy this show – the premise is based in a MMORPG world.  It starts with some folks playing a new MMO via virtual reality.  I don’t want to give away any of the plot, but it quickly escalates and the stakes become very real and very high.  The first season really feels like two, but I watched the entire series in about two weekends.  Since it’s in Japanese with English sub-titles, I found that I had to pay very close attention, so it’s an intense binge, should you choose to do the same.

I wish I could say that this was a gateway anime for me, but, alas, that was not the case.  I have found a couple that I’ve liked since then such as Aggretsko and Neo Yokio, but I still struggle with the format.  However, SAO sucked me in.  I even bought all of the related video games (Playstation-only for now), a Funko pop of the main character and a plushie of another, Klein: 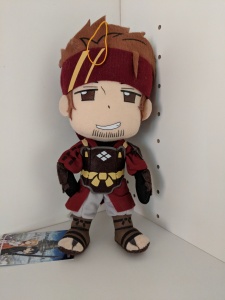 I have tried to get into the second season, but it just isn’t happening.  However, if you have never liked anime but love video games as much as I do, give Sword Art Online a shot!