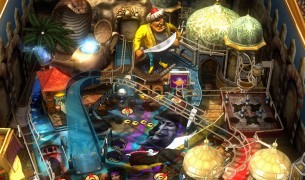 I have been playing pinball games since I got my first Windows 3.1 Tandy computer (thanks Mom and Dad!).  I started with DOS-based Epic pinball, moved to Sierra’s 3D Ultra pinball, Kirby pinball on the Gameboy, then a gap until Pinball FX on the XBox original and finally Pinball FX 2 on both the 360 and XBone.

This game carries forth the fine traditions of the pinball games before it.  It is a collection of downloadable tables (for a fee, of course).  The graphics are great.  The tables are very busy, but it (usually) doesn’t get in your way of tracking the ball.  The sound effects are also good and unique from table to table.  I would recommend playing with a spotter, though, because you will be so transfixed on the ball that you’ll have no idea what is going on around the table.  The physics are also very good and do change from table to table.  Some tables are really fast, others are ramp-heavy and yet others have an older-school feel.  On some tables you’ll score 50 million without much trouble, and others, 2 million is a feat.

What really makes this game stand out, though, is the sheer number of tables.  I have probably downloaded about 40.  If you like Marvel, you’ll like this game.  There are games of many different characters – Deadpool, X-Men, Avengers, Spiderman, Fantastic Four, Ghost Rider, Dr. Strange, Guardians of the Galaxy, etc.  There are about 15 Star Wars tables.  I also like the South Park and Animation (Archer, Bob’s Burgers, Family Guy and American Dad) tables.  There are also a lot of Zen originals that are fun.