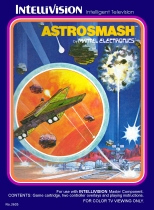 As previously mentioned, we had an Intellivision growing up.  I loved it.  This was one of the games that we had, and I remember it fondly, although I am not sure I ever reached the second level.  Games back then were so hard because they had to be – you had to keep players coming back to play, and a good way to do that was the high score.  These days, games rarely even have scores.  But it was an effective way to keep people playing and talking about your game.

This was also one of my mom’s favorites and she could get all the way up to at least level three.  The sky background changed for each level, and you could drop levels as your score was constantly changing as asteroids were either destroyed or hit the ground.  There were also satellites to shoot, an occasional UFO or other space-inspired pixelated blob.  When you shot the larger asteroids, they would break into smaller ones, which you also had to shoot.  It made for chaotic fun, and I have pulled it out from time to time on my GCW Zero.  I can only play it for about two minutes before I’m  ready to throw it across the room, but I still at least remember it as being a positive experience.

This happens when you live near the Space Center in Houston.