Typing of the Dead is an interesting game that spans two interesting genres – education and horror.  You are playing as a zombie hunter running through a world filled with the slow buggers.  Although, sometimes they are not so slow and will jump at you and make you jump.

You start by typing one or two letters at a time, but before you know it, you’ll be typing long phrases, including special characters that are sure to slow you up.  It really encourages accurate typing as every mistake you make costs you precious time.  It required a special keyboard for the Dreamcast or PS2, so it was likely most commonly played on PC.  It’s available now on Steam, and I still have fun chopping my way through levels.

If you never played this one, check it out!  It holds up well since its initial release in 1999.

Infiltrator was a game for the Commodore 64.  You played the role of a secret agent and helicopter pilot.  You flew missions and performed recon.  However, to be honest, I don’t remember a lot about the actual game of Infiltrator.  My cousin had a Commodore 64 and we would sometimes play this.  I’m not sure we were ever able to get beyond flying the helicopter and would usually crash.

What we did have a lot of fun doing was dressing up like helicopter pilots, using earmuffs and a straw to simulate a headset, and pretend to be successful spies.  We would sit in our “cockpit”, listen to and accept the mission, and do our best to complete the mission.  I doubt we ever did, because the additional gameplay screen shots don’t look familiar to me at all.

I do remember this being a fun game for what it was, and provided two young girls hours of imaginative entertainment.  I went back on an emulator and tried to play it, but it just wasn’t fun without my old friend sitting next to me.  Check it out, though, and maybe you’ll discover a cool game buried under my nostalgia.

Back in the early days of the internet, we didn’t have a lot of options for online gaming.  There were chat rooms with various solitaire games, online pool was popular for a while, and there were word games.  The games had to be small and efficiently programmed to allow the required communication over *gasp* dial-up modems.

One such game was Acrophobia.  This was a fun game in which you were presented with an anagram, such as ACRO.  Every player had a short amount of time to come up with what this anagram stood for.  For example, ACRO could be Anyone’s Capable Roman Orangutan (I didn’t say I was good at it).  All players would then anonymously vote on the one that they thought was best.  Players got points and eventually, someone won!

Here’s the voting round:

Both my mom and I spent a lot of time playing this one.  It came out in 1995 and lasted for a few years.  I think it pops up every now and then online still to this day.  It was a fun game and certainly was an oldie but goodie! 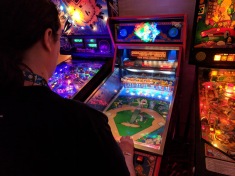 While at the Houston Arcade Expo, I discovered a game that I sunk a lot of allowance into when I was a kid.  This table was at our local Shopko (department store), of all places.  It’s Slugfest by Williams, a baseball “pinball” table.  As you scored runs, it would spit out baseball cards.  I was a big collector of baseball cards, so this game was an instant hit with me.

It isn’t pinball in its truest sense, however.  Your goal is to score runs.  You do this by selecting the pitch you want (fast ball, change up or curve) and then you use the flipper bat to hit the ball.  There are different players at the back of the field, and you hit the ball into one of them.  Whichever LED is lit at that time is the action you get.  For example, if double is lit, you get a double.

I have played the crap out of this table this weekend and I occupy the top six spots on the leader board now (see picture above for proof).  The sad part about this table is that rarely anyone else is playing it.  It is truly an underrated game.  If you are a baseball fan, see if you can track this one down.

I really like roller coaster building games.  I have played nearly all of them and I’m about to venture into one of the newer ones – Planet Coaster.  My love for the genre first started with a game called Coaster by Disney games.  This was one of the first coaster sim games.

This game was really ahead of its time.  It was released in 1993 and didn’t benefit from the internet for much endorsement.  I don’t think a lot of people know that it existed.  In this game, you could not only design a roller coaster and put it through computer simulations, you could ride it yourself!  It wasn’t the best graphically, but they get an A for effort. 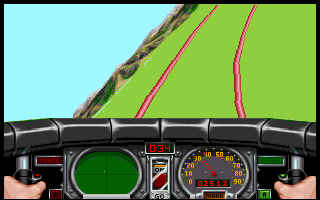 You could also have other people test it for you and they would rate it.  I tried so hard to find an image of the folks after they rode it, but didn’t.  Their faces would change based on the intensity of your coaster.  On your most insane (that didn’t kill them), they would have vomit on their faces.  It was pretty funny to my juvenile self.

I was able to find this game on gog.com.  It doesn’t run very well, however, as the speeds are just off.  I tried tinkering with emulation settings to no avail.  Try it for yourself, though, and enjoy the ride! 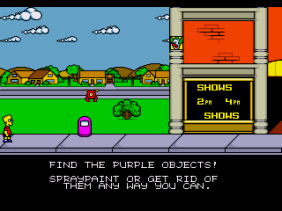 The Simpsons have been around for a long, long time.  Along their long history have come some pretty good video games.  One that I played as a kid was Bart vs. the Space Mutants on the NES.  This was actually the first licensed Simpsons video game.

In this game, you are playing as Bart and you’re wandering around Springfield.  You’re just trying to go about your daily business of vandalizing the city when you notice that something is off – aliens have invaded the city!  You are armed with your spray can and x-ray glasses.  Using these, you can identify and deal with those pesky aliens.

Many of the show’s gags make this game, such as Bart’s catch phrases (“eat my shorts!”) and his phone gags to Moe: 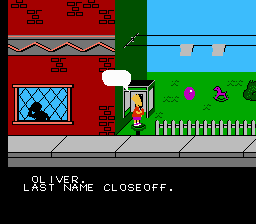 I don’t remember much else about the game, but I think it was fairly difficult as I never finished it.  I do own this one and will likely pop it in my NES some time.

This isn’t a video game, but it’s still an electronic game, so it’s going up here.  I had this game as a kid and my family and I had a blast with it.  What the heck is it?  It’s Babble by Galoob.  It was a really goofy game where one person took it into a different room, out of earshot, and said a word or phrase into it.  You then returned to the group, and it would play what you just said either backwards or at a super slow speed, depending upon the game you selected.

Someone would then press the “mimic” button and try to repeat what they heard.  It would then either play that at normal speed or front-wards and you would try to guess the phrase based on that.  It was really funny and very typical of a game that my family played back then.  This beauty was from 1988.  I have looked all over Ebay and the interwebs and I cannot find it.  If you happen to run across it, let me know where!

I came in to school at a great time in history.  Home computers were newly affordable, which meant that they had a couple of them in schools.  They began using games as teaching tools, and we were learning while having fun and not even realizing it.  One of these early games that I remember is Number Muchers.  There were several “Munchers” games after that, but this was the first.

You played as the hero, the number muncher.  I’m not sure what you were trying to save and I don’t think there was much of a story behind this game.  Anyway, it was your job to “munch” the numbers (press the space bar) that fit the category at the top.  It typically focused in number multiples, but sometimes it would be prime numbers and other varieties.  The Troggles attempted to foil your plans for heroism.  They were cute monsters that were trying to eat you.  Every time you moved a square, they moved a square.  They started out pretty random, but on later levels, they had some AI and made the game more and more difficult.

I remember this game very fondly.  So much, in fact, that I just bought a Number Munchers t-shirt.  You can still find this game online in various forms.  If you want to play the original, you can find it on abandonware sites and play it using a DOS emulator such as DOSBox.  It’s a blast from my past and I’d be interested to know how many of you also played this game in school!