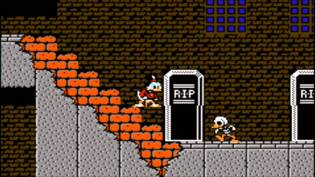 I was a big fan of the Ducktales cartoon as a kid.  In fact, I have the entire series on DVD and it is still a great cartoon today.  I was excited to see that they turned it into a video game back in the NES games.  I played through this one quite a bit as a kid.  You played as scrooge.  Someone came in and stole your money and it was up to you to get it back.  As was the case with the cartoons, you traveled around the world in search of your treasure.

The game featured a neat control room which let you select the levels you wanted to play.  It was a map of the world.  You could visit the Amazon, arctic, Transylania (my favorite level), the moon and more.  You had the assistance of your crew – Launchpad, Gyro, Huey, Dewey and Louie and more!  Each level was fairly large and had its fair of challenges and secret areas.  You were armed with your cane, which doubled as a pogo stick so you could stomp the baddies.

The graphics were pretty good for an 8-bit game and the soundtrack was catchy.  I loved everything about this game.

This game has since been remastered for the XBox and the graphics received a much improved facelift.  The story is pretty close to the original game, with a few additions that add to it.  See the difference in graphics below: 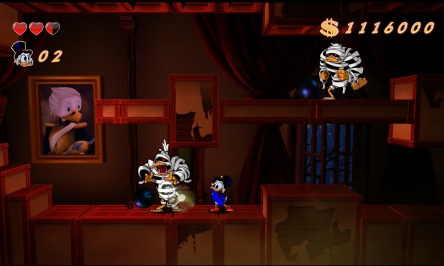 If you liked the original, you’ll like this one as well.  However, I will still likely play the original from time to time just for a bit of nostalgia.  There was also a Ducktales 2, but I don’t think I ever played that one.