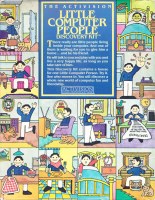 Long before there were The Sims, in 1985, there was Little Computer People.  This was a game on the Commodore 64, but I also believe it was released for the Apple II and Amiga, too.  My cousin had a Commodore 64 and she had this on her computer.  We played it quite a bit.  The premise is this – there are actual little people living inside your computer and they want to interact with you.  Each copy of the game had a different person and all were unique.  My cousin and I named her little person Norbert.

We could give Norbert commands to do things like sleep, play the piano, cook, etc.  He would also do these things without us telling him to.  It was really a unique game for the time that I really enjoyed.  I haven’t played it since, but after a quick Google search, I see a download for it.  I might try it again as an adult and see how it stands up.  If you like sim games and want to see the foundation of that genre of games, check it out!

The video below is pretty funny, btw. This player gets pretty frustrated with his little person.