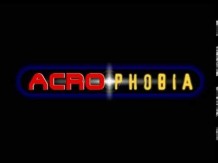 Back in the early days of the internet, we didn’t have a lot of options for online gaming.  There were chat rooms with various solitaire games, online pool was popular for a while, and there were word games.  The games had to be small and efficiently programmed to allow the required communication over *gasp* dial-up modems.

One such game was Acrophobia.  This was a fun game in which you were presented with an anagram, such as ACRO.  Every player had a short amount of time to come up with what this anagram stood for.  For example, ACRO could be Anyone’s Capable Roman Orangutan (I didn’t say I was good at it).  All players would then anonymously vote on the one that they thought was best.  Players got points and eventually, someone won!

Here’s the voting round:

Both my mom and I spent a lot of time playing this one.  It came out in 1995 and lasted for a few years.  I think it pops up every now and then online still to this day.  It was a fun game and certainly was an oldie but goodie!

I love puzzle games, especially word games.  And I REALLY wanted to like this game.  I was excited to get it and it cost more than your average word game.  I played it for a good couple of hours, but it just never grabbed me.

If you’re not aware of them, Jumbles are puzzles that have been around American newspapers for a very long time, since at least 1962.  I have enjoyed them for a while, though they are not my first choice of word puzzle.  Anyway, I found that this game was far too easy.  It’s not a fun puzzle if you can solve it in 20 seconds.  This game has some sort of story mode, but it didn’t add anything to the game.  It also has a strange “word-jong” mode, which just has you matching letters like a shanghai-tile game.

If you were looking at this one, skip it.  It’s not much fun.

I believe I have expressed my satisfaction with Pogo.com previously on this site, so it’s no surprise that I really enjoyed this compilation of 5 different Pogo games, Pogo Island for the Nintendo DS.  This game contains a couple of my favorites – Word Whomp, Tri-Peaks Solitaire, Phlinx, Squelchies and Poppit.  Each game is fun in its own right and I can easily play them for hours on end.  This is a great game for travel for me.  Just pop it in and the time on planes just flies by (pun intended).

This game also lets you collect tokens as you play and upload them to your Pogo account, which is a nice bonus.  If you’re a fan of Pogo games or just solitaire games in general, I think that you will really enjoy this one.  I happened to have found it by accident in a GameStop one day and picked it up immediately.  I had never heard of it before, so it was a true hidden gem. 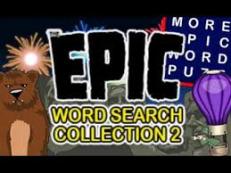 For many of us word game enthusiasts, word searches are what we start on when we are just starting to learn to read.  I was certainly no different.  While they are not typically the most challenging of games, they are great for letting your brain idle and wasting some time.  I personally play these when I’m watching something on TV that isn’t particularly enthralling.

I discovered Epic Word Search on the 3DS store about a year ago and was captivated.  This isn’t your grandma’s word search.  Instead, it consists of five boards, all containing 9 separate sections of word searches containing a category of the big board.  In Epic Word Search 1, the categories are Rock and Roll, Movies, Food, TV and Sports.  Each sub-category as somewhere in the area of 60 words, so each board has over 350 words to find.  It’s challenging and fun and will take you hours to do.  The categories for Epic Word Search 2 are Animals, Journeys, Ancient, America and Shakespeare.

If you like small games that can take up a lot of your time, like word games and have a Nintendo 3DS, then this one is for you!

This game was close to making my top 25, but I felt I had enough puzzle games there.  This entry on the Nintendo DS is a collection of many different types of puzzles including hangman, picture puzzles, crosswords, word searches, sudoku and many more!  There were actually four games in this series, and they may not be done.  Any one of them is great and they each add or remove something from a previous game.  There was one released for the Nintendo DS, two for the 3DS and one downloadable for the 3DS.

It all started on the DS, however, so that’s where I’ll start, too.  I have spent many, many hours on this game.  It’s great for quick bursts of puzzling fun.  The later levels will start to take longer to solve.  Toward the end, it was taking me 20+ minutes for some of the more detailed puzzles.  The stylus, as usual, is perfect for puzzle games like this.  The crosswords are handled well as you can write the letters on the screen and it is able to detect them.  It may take a bit of tweaking in the settings for it to recognize certain letters, but once it’s dialed in, it’s near-perfect.

The variety of games is nice and will keep your brain occupied.  They are a great mix of logic puzzles and word games.  You don’t have to play any that you don’t want to, which is nice.  Many games only unlock games as you play, but this one lets you have full reign.  There are also challenge modes in some versions, where the puzzles are a bit harder.  My favorite are the word searches (I’m just a sucker for them) and the link-a-pix, which is the ambulance picture above.

You may not have heard of the series, but it’s a must if you like puzzle games as much as I do!

I found this game two days ago on the XBox Store.  I am already declaring it an awesome game.  I’ve spent a total of about 8 hours playing it, although it feels like a lot more.  I love a good word game and will easily get sucked into one.  This particular word game combines a typical word game with an RPG!

You start the game playing as Grimm, a little dude working his way through a monster-filled realm.  You can play in either story mode or endless mode.  Both are fun.  Endless is just what it sounds like – a survival mode where you work your way through monster after monster.  You earn coins as you go and can occasionally buy upgrades and potions to help with the increasing difficulty.

As with most games, story mode is where it’s at.  You work through a map of levels, earning stars as you go.  This is where it gets cool – the stars aren’t just given for varying levels of “good job”.  Instead, you need to play through each level four times to get all of the stars.  Each is an objective.  For example, the first is simply beat the monsters.  The second is a time trial.  The third is some sort of challenge like “can’t use E” or something equally as challenging.  The fourth is a special challenge where the monsters are much tougher and have specific requirements like “takes damage only from words starting with a vowel”.

As you play through story mode, you can spend crystals you earn on permanent upgrades.  There are a lot of them and they all help to make you more awesome.  Of course, if you’re not good at the core of the game, it’s not going to matter much.  The game play is simple – find words from a block given to do damage to monsters.  It sounds simple and is, but when I spelled out the word “AFFIDAVIT” the other night, I felt pretty awesome.  Some monsters will make tiles unusable or make it so you take damage when you use them.

It also keeps track of your stats!  This is a feature I always like.  It shows you how many of pretty much everything you’ve done.  I’ve spelled the word “BACON” five times and spelled out 25 palindromes.  And for the fellow achievement whores – this game is going to be a breeze to complete.  I’ve gotten 40 achievements in just under 8 hours.

This all leads to a really fun and highly re-playable game.  If you like word games, find it!

Let’s discuss “casual” gaming for a bit.  It’s a term that has always held negative connotations in the gaming community.  These are quick, easy games that are usually played in a browser or on a mobile device.  People who play these games are often thought of as non-gamers.  Screw that.  I’m a gamer and I love casual games.  These games are great for the times when you just want something light which doesn’t involve a lot of thought.

The web site www.pogo.com has tons of these games, and this is my favorite of them.  I talked about using replayability and time spent playing as a criteria for my list, and this game definitely fits that.  I’m actually including three games in this post – Word Whomp, Word Whomp Whackdown and Word Whomp Underground.  My mom started my love of word games pretty much from the time I could talk and I’ve never looked back.  We always make time for a game of Scrabble every time I go back home.  She also enjoys these games a lot, so it’s a rare gaming moment that we can share.

The games themselves are quite simple.  Word Whomp is a standard anagrams game.  Find all of the words hidden in the letters listed and you win.  Whackdown arranges them differently and is a bit tougher.  It has a bonus round.  Underground is original Word Whomp with a slight story behind it.  Once you start playing, I dare you to stop!  The “one more game…” monster will definitely get you with these.