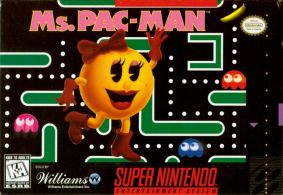 Ms. Pac-Man is still a great game, 30 years later.  It’s hard to improve upon the original formula.  Her game was superior to Pac-Man in just about every way.  In this Super Nintendo version of the game, however, they did manage to improve on that arcade classic.

The SNES version of the game lets you select what kind of maps and difficulty you want.  There are tiny, regular, large and strange maps.  I loved the strange maps as they were significantly more difficult than the regular.  For example, here’s one that is missing the side guides in the map:

It might not seem like much, but when you have Blinky breathing down your back, it is really tough.  There were also some really weird items that you could collect such as a pizza or ice cream cone.  One of the best features of this game was the “pac-boost”, which allows awesome speed relative to the ghosts.  It allowed you to feel like an awesome player!  All of these changes made the game more fun and made the replay-ability greater.

If you’ve never played this version of it, check it out!